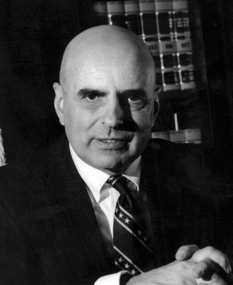 Prior to his appointment to the Municipal Court in 1972, Arabian maintained a private law practice on Van Nuys Boulevard across from the court for nearly a decade. He went on to become Supervising Judge of the San Fernando courthouse. “The SFVBA couldn’t have been any prouder when Judge Arabian ascended to the California Court of Appeal and eventually the Supreme Court,” says SFVBA Executive Director Liz Post, who has held her position since 1994.

Upon his retirement from the Supreme Court in 1996, Justice Arabian returned to private practice as an arbitrator, mediator and attorney from his storefront office on Van Nuys Boulevard. Arabiam received the SFVBA’s first and only Lifetime Achievement Award in 1993, which is proudly displayed in the Bar’s offices because he wanted to share it with the Bar’s entire membership. In 1999, the Bar dedicated two Attorney’s Research and Communications Centers in his name at the Van Nuys and San Fernando courthouses.

“For more than 55 years, Armand was a revered member of the San Fernando Valley Bar Association,” says Kassan. “Following his retirement from the Bench, he continued to be involved in SFVBA programs and events, and provided support to the Bar and our Valley Community Legal Foundation. We will miss Justice Arabian for his wisdom, humor and patronage.”